Spend time wisely while in Windhoek and experience the culture diversity of Namibia with a professional guide.

Meerkat Safaris offers a 4-hour city tour through a walk down the memory line exploring Namibian rich history and unique day to day African city life.  As your visit to Namibia would be incomplete without a visit to Katutura township, Meerkat Safaris grafted this product in such a way to lift the curtains for you to catch a glimpse of our rich cultural diversity and heritage.

The iconic church belongs to the german evangelical lutheran church. It was built after the wars between the Germans, Khoikhoi, Herero and Ovambo tribes. The foundation was laid on 11 August 1907 and officially dedicated on 16 October 1910. It was originally known as the church of peace.

The museum is a post independance historical landmark built by the Namibian Government. Its main focus on anti-colonial resistance and national liberation struggle of Namibia. The museum was inaugurated by former President Hifikepunye Pohamba on 21 March 2014. In front of the museum you find the statue of the founding President Sam Nuyoma. 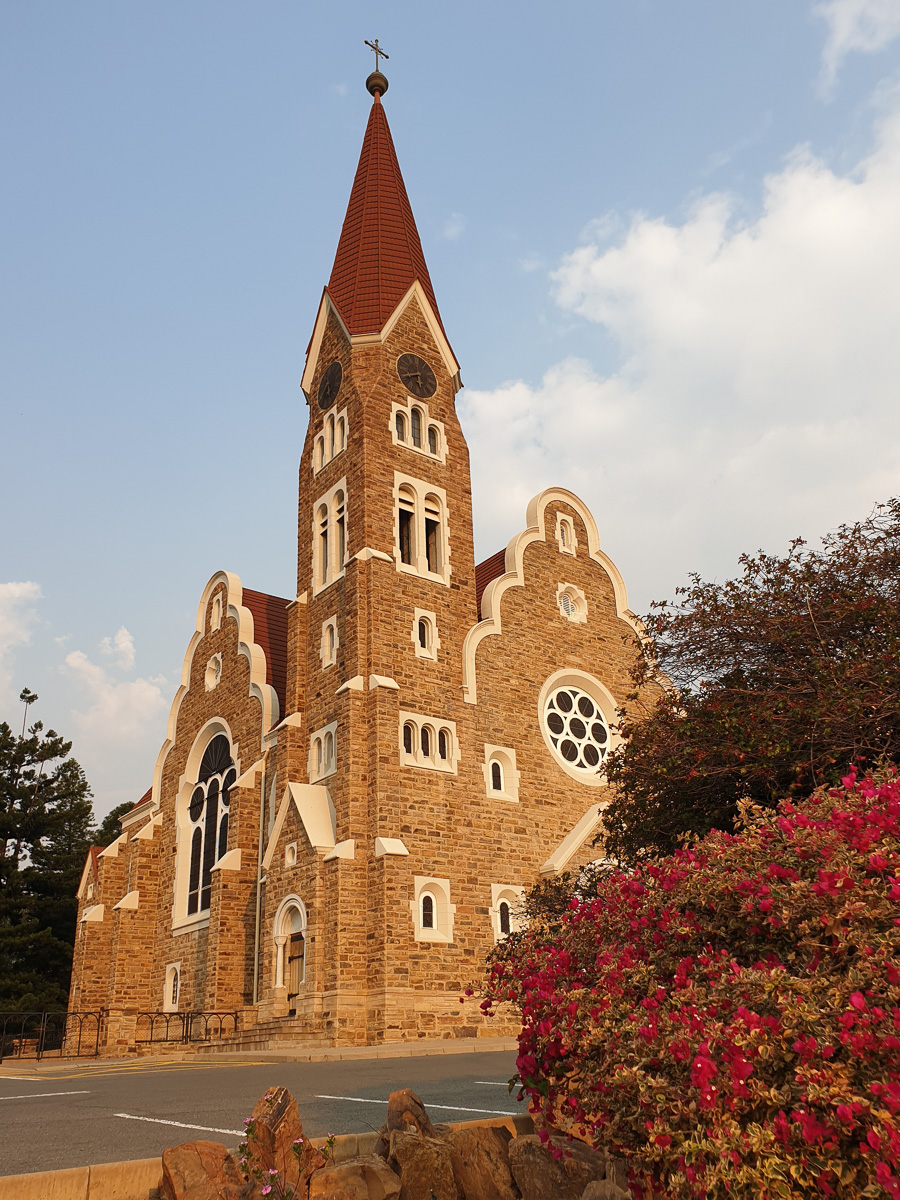 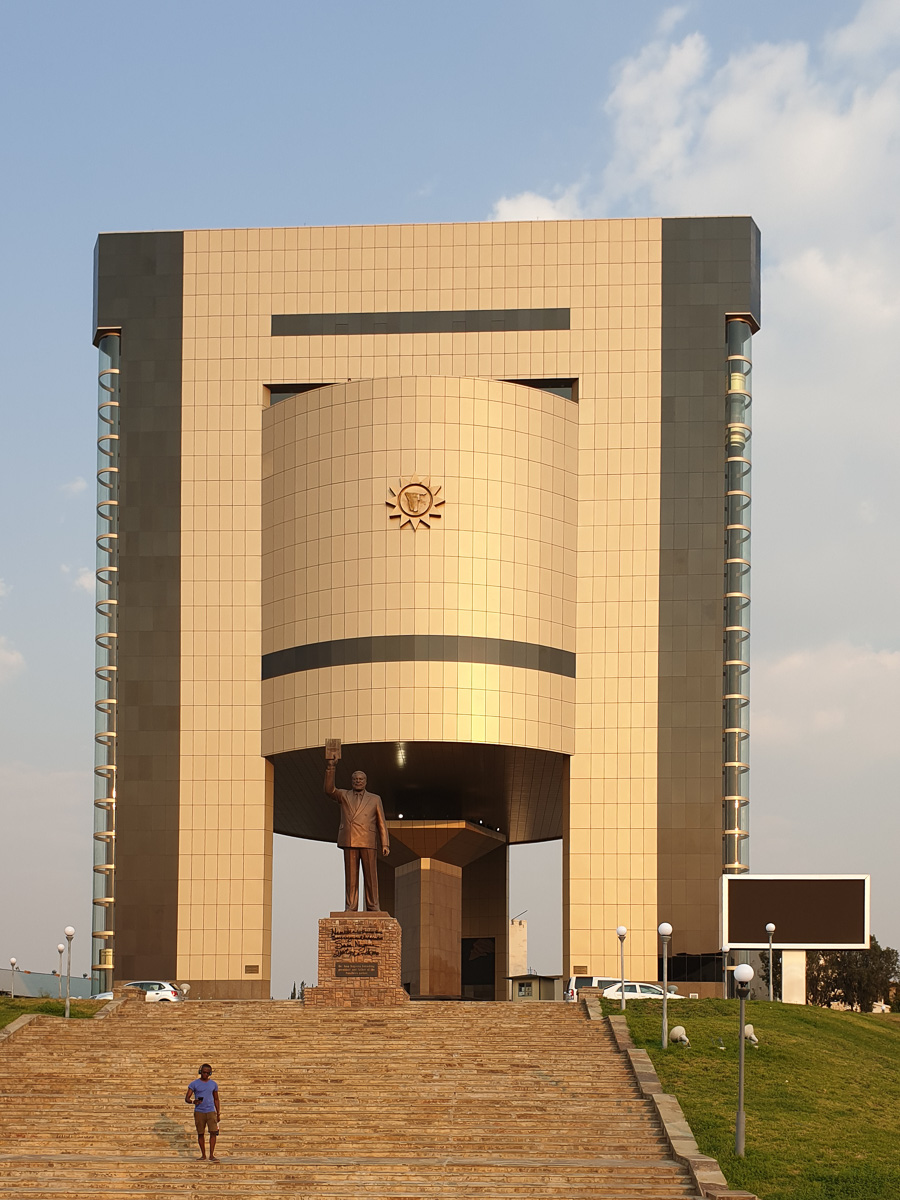 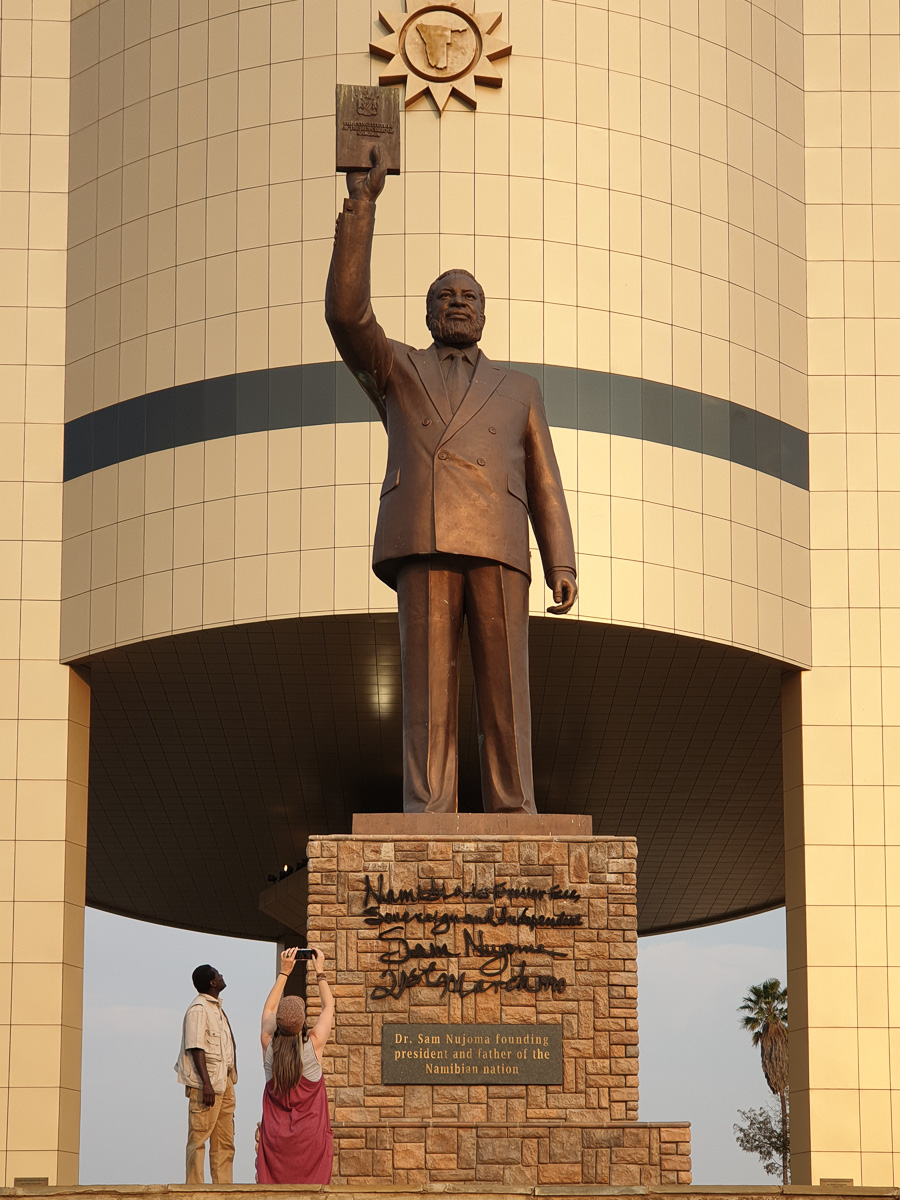 The building is also known as Tintenpalast (Ink palace). It seats both Namibian Houses of Parliament of Namibia. The building was constructed in 1912 and inaugurated in 1913. Opposite the main building lie the Parliament Gardens. The most noticeable bronze statues are those of Hosea Kutako, Hendrik Samuel Witbooi and Rev Theophilus Hamutumbanga, who all played pivotal roles in the early struggle for Namibia's independance. 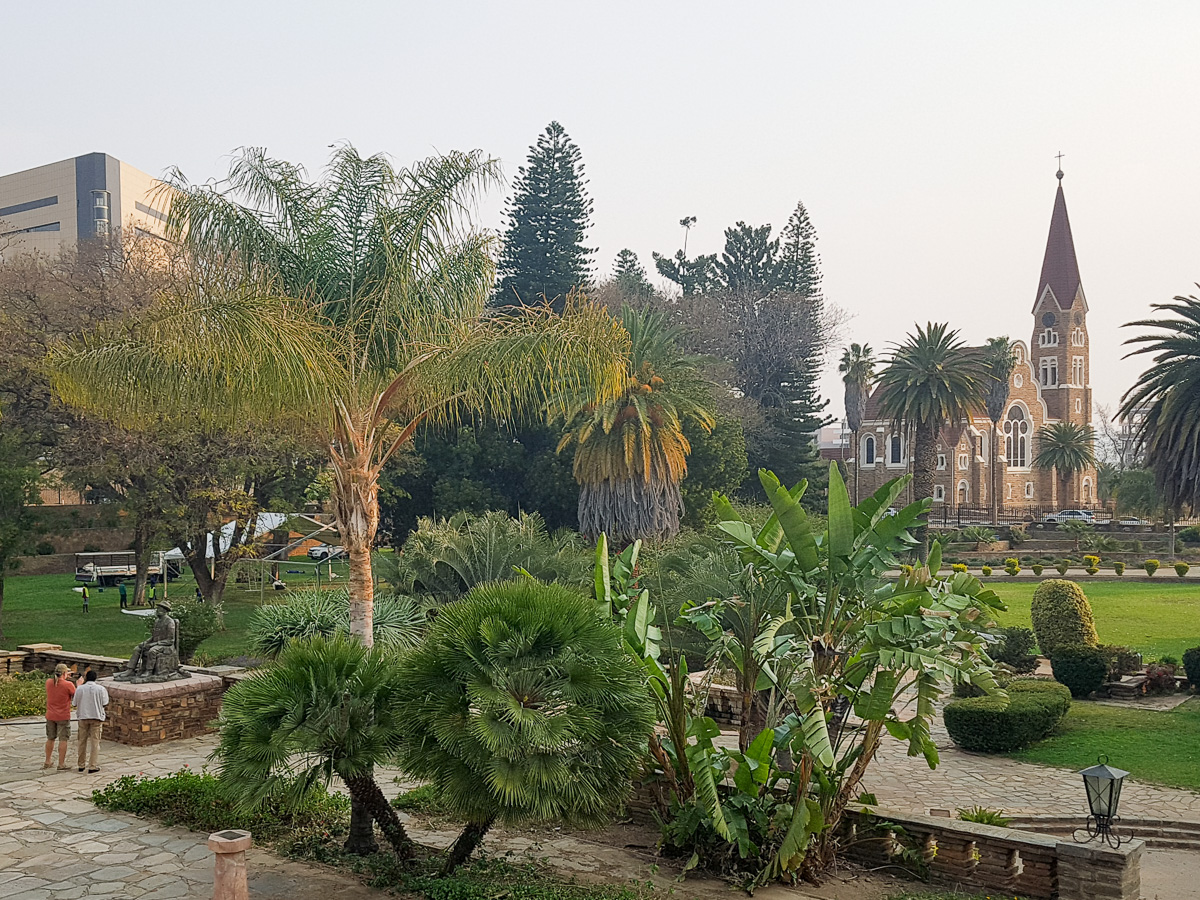 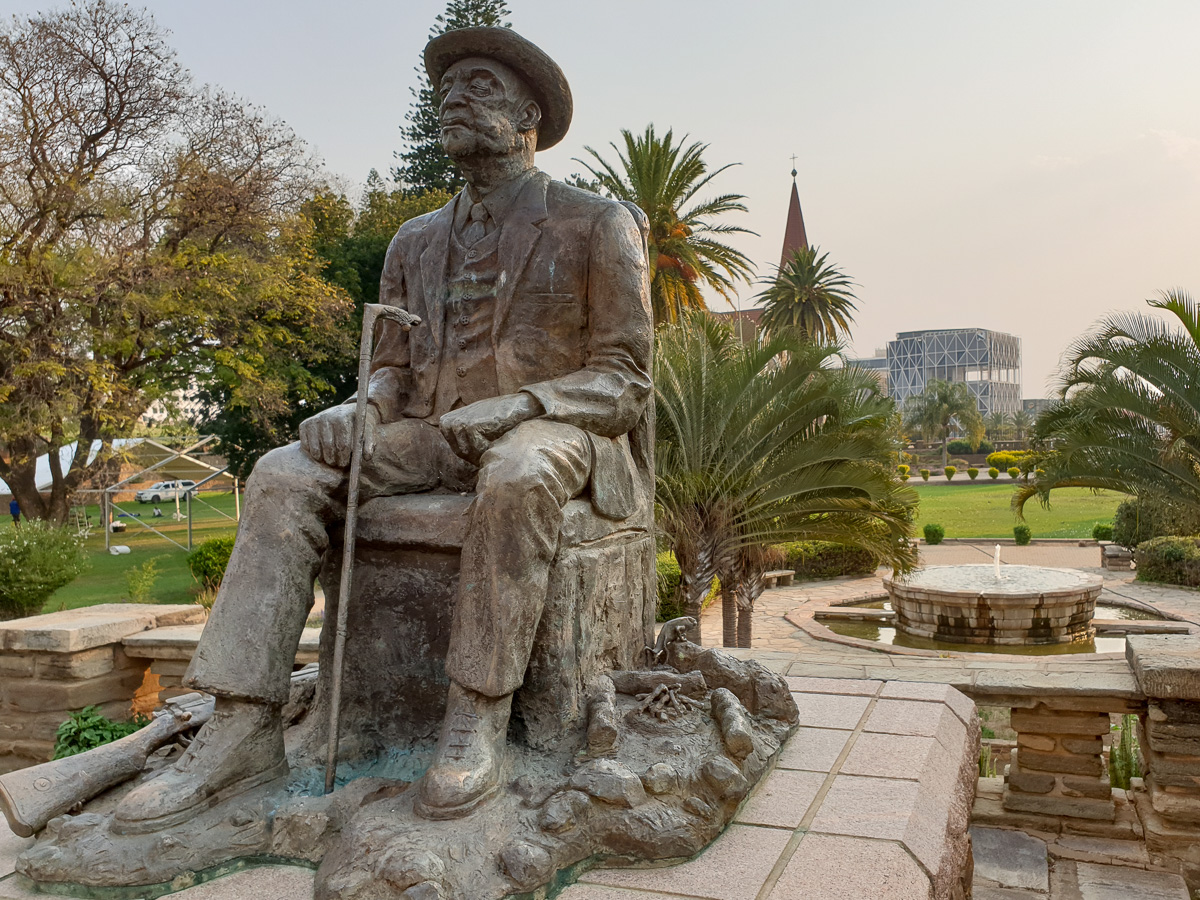 Even though the City of Windhoek was already founded by locals and named by Jonker Afrikaner in the 1840, the current infrastructure only took shape under German colonial rule.  Alte Feste building is considered the oldest building in modern Windhoek.  Its foundation was laid on 18 October 1890.  Having served different roles from German rule right through the South African regime, it was declared a national monument in 1957.  After extensive renovations it has been in use to host the National Museum of Namibia since 1963.  Currently this landmark is not in use and awaiting further renovations.

The Equestrian Monument, commonly known under its german original name – Reiterdenkmal – was inaugurated 27 January 1912 on the birthday of German Emperor Wilhelm II.  The monument was erected in honour of the soldiers and civilians on the German side who had lost their lives at the hands of the 1904-1907 Herero and Nama war.  The monument was unmounted in 2009 and re-erected in a slightly different position from where it was completely removed and stored in the Alte Feste courtyard in 2013. 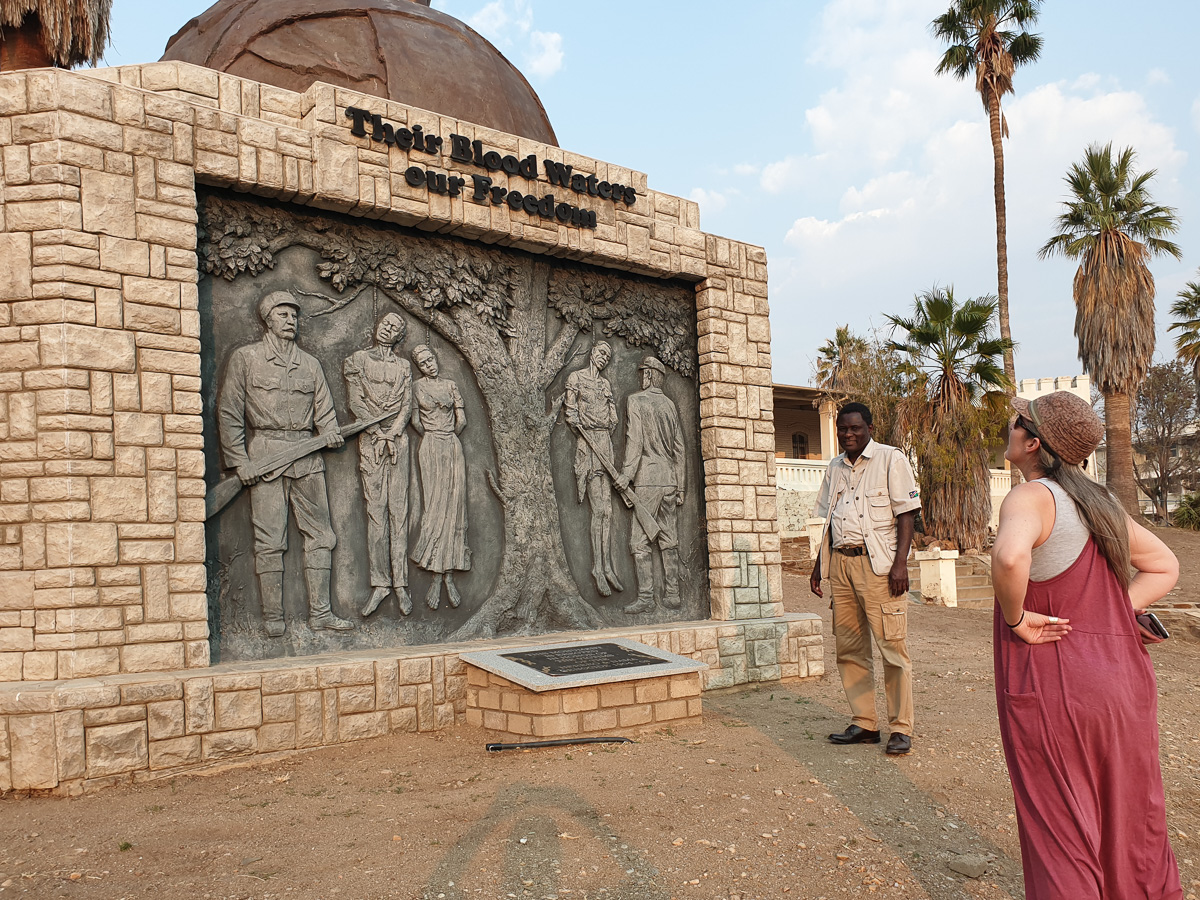 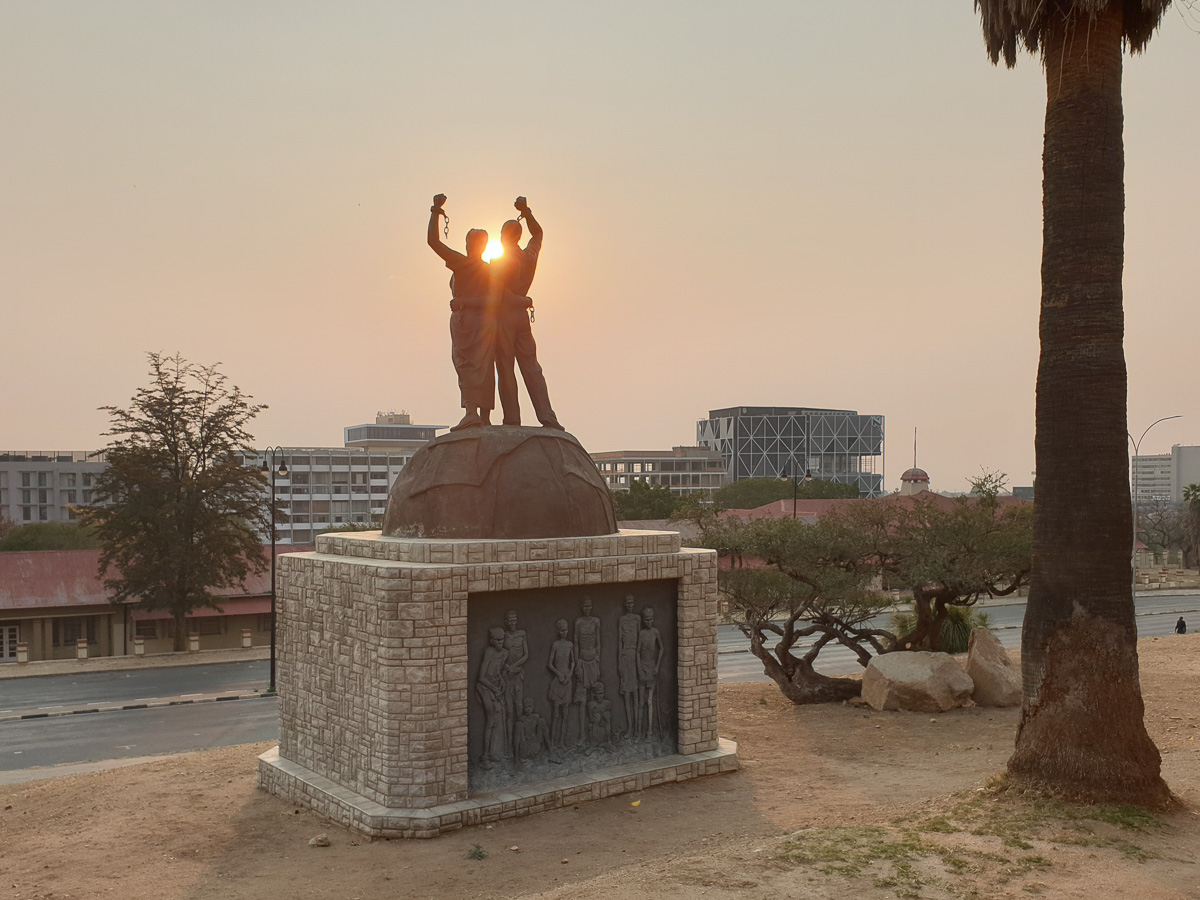 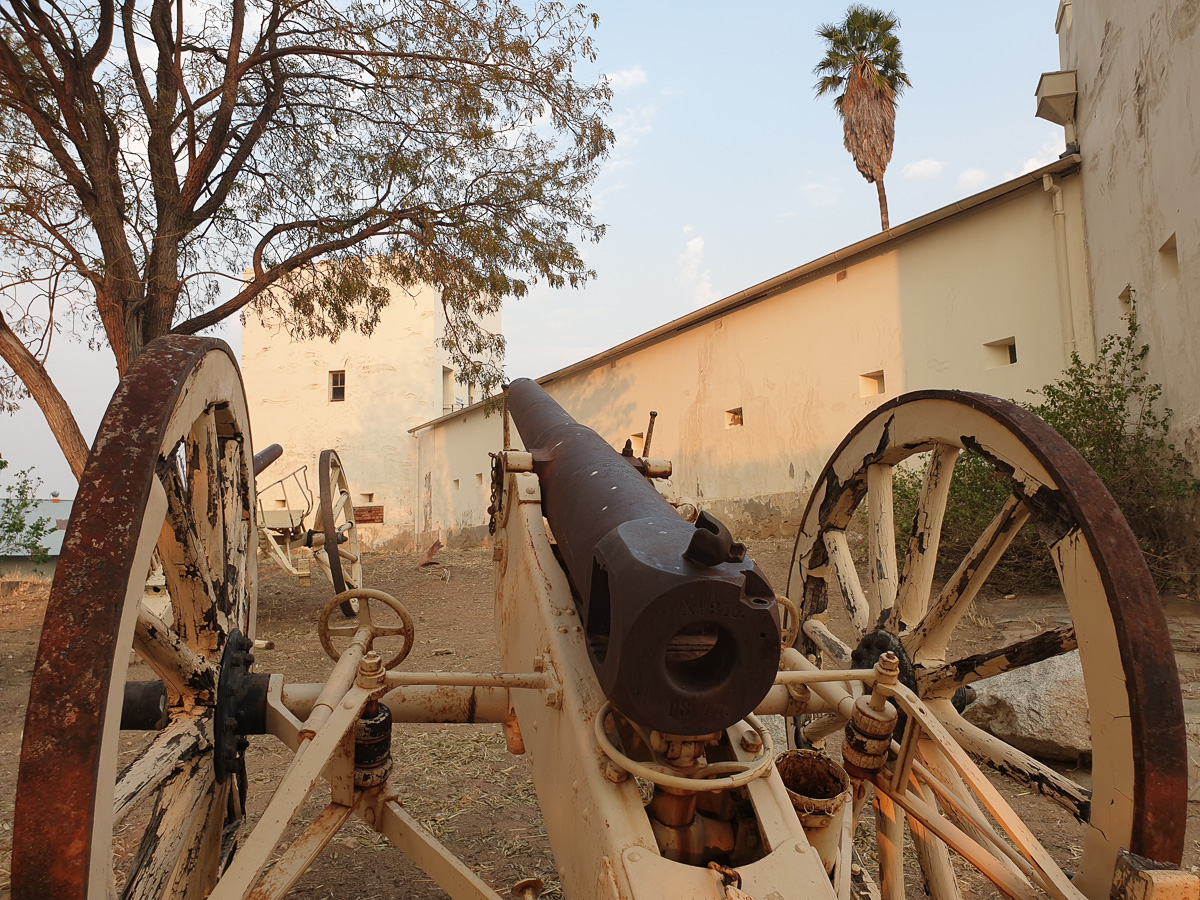 Professor Behn designed, sculpted and casted the life size statue in Munich. The Town Council provided a suitable site and constructed a pedestal near a fountain in front of the High Court in today's Independance Avenue.  The statue was unveiled in 1960 and represents the "spirit of hope" in combination with outstanding artistic craftsmanship which symbolizes a shared passion for the beautiful abundance of the Namibia's wildlife. 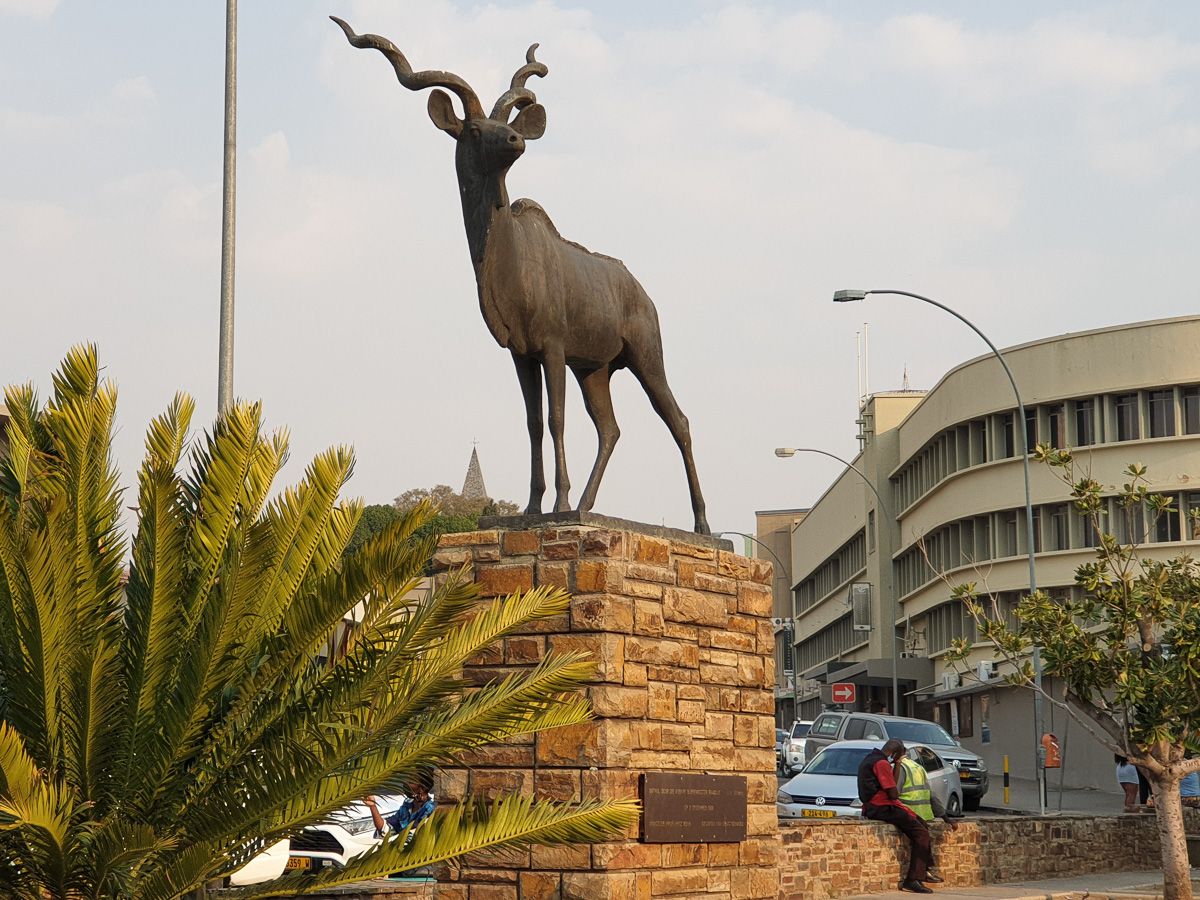 Meerkat Safaris through its business activities incorporated the local community support system by bringing its guests in contact with the Penduka Women's Project.  Penduka in Oshiwambo language means wake up.  The main aim of this project is to awake the local women into the mainstream of social economic activities.  The project started in 1992 with the mission to help women from rural communities with challenging backgrounds to acquire skills which would enable them to have a sustainable income through craft work.  Skills training provided by the center are embroidery, recycled glass jewelry & beads, pottery, gardening, aquaponic system and storytelling.

During your time of the tour depending on time and how busy their schedules are you can watch the women make glass beats, create batic, make pottery or beautiful embroidery.  At the end of your tour you can visit their shop and purchase your choice of souvenirs and gifts for your loved ones back home.  The center is located in a perfect area on the banks of the Goreangab water reservoir creating an outdoor lake atmosphere where you can breathe fresh air.  This is also a great place to have lunch or dinner. 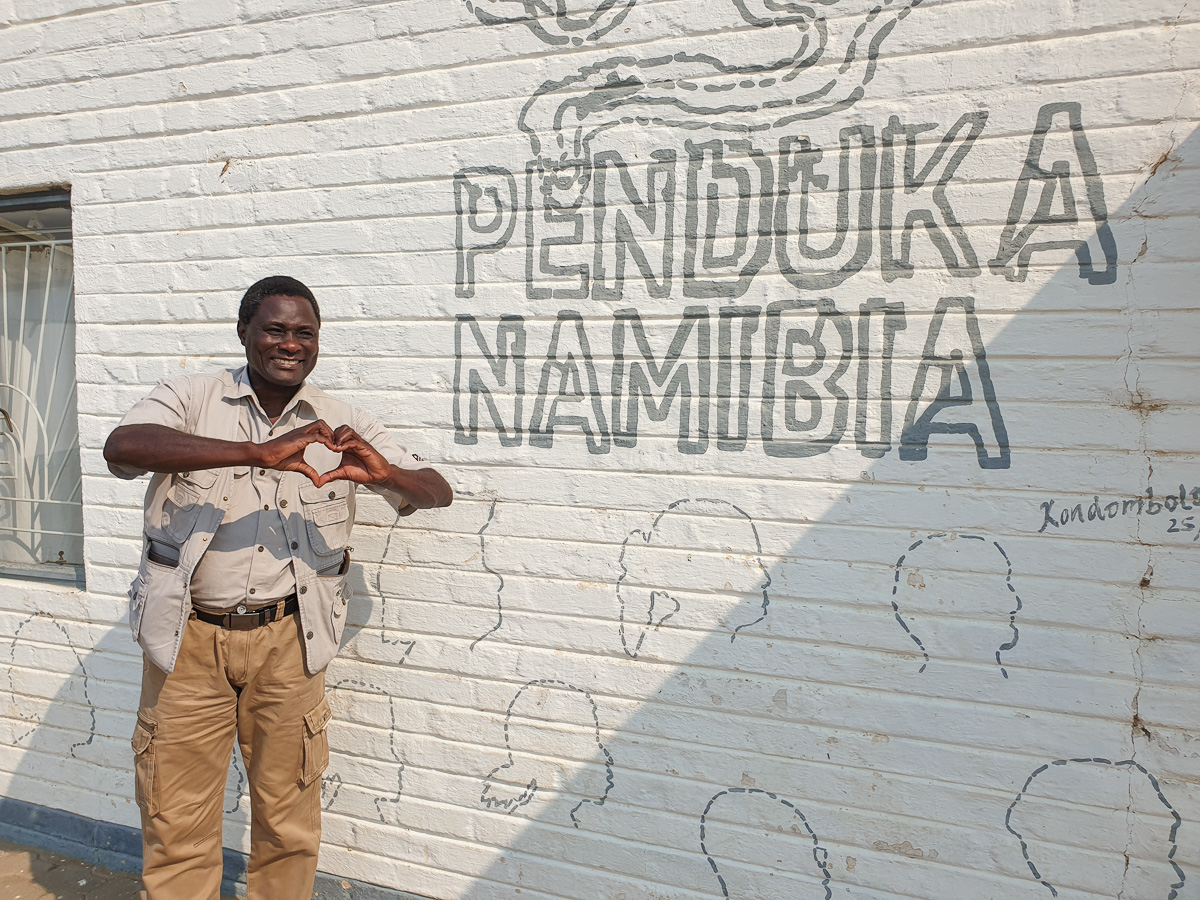 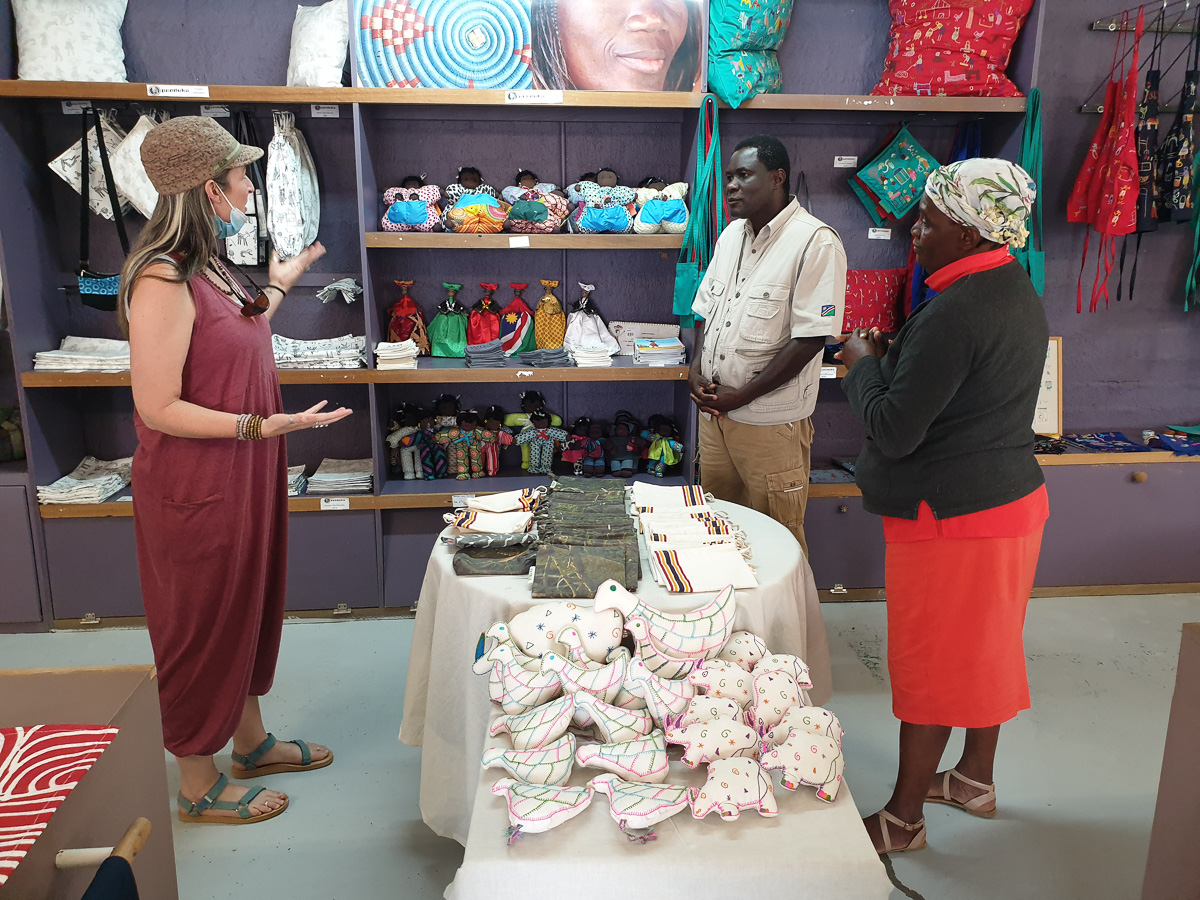 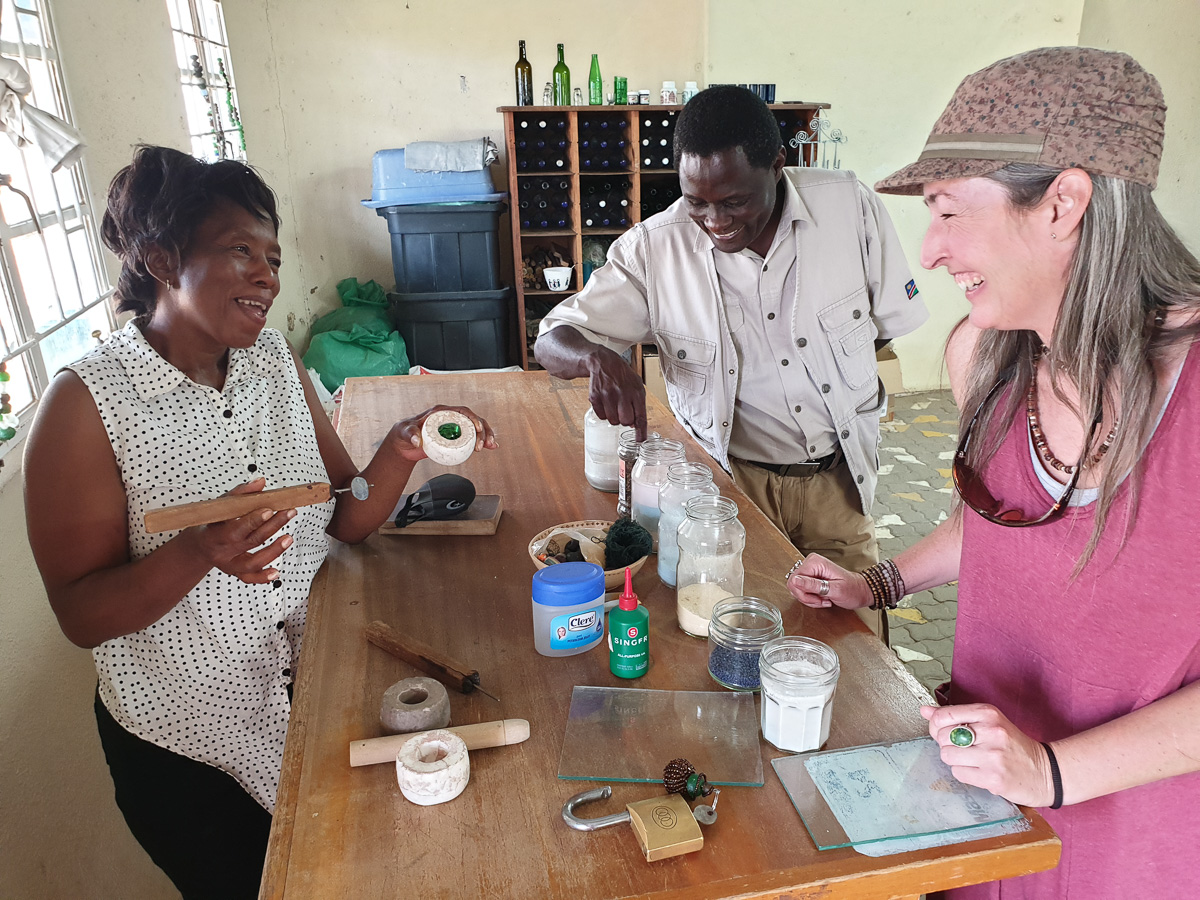 Many times the question was raised... Where can I try African cuisine?

This is our perfect answer to  that question.  Decorated in truly Namibian traditional colors and artwork, it gives you a genuine home feeling while the delightful Namibian traditional dishes nourish your appetite.  Here you can try out mopane worms, a southern African cultural delicacy and many more Namibian dishes. 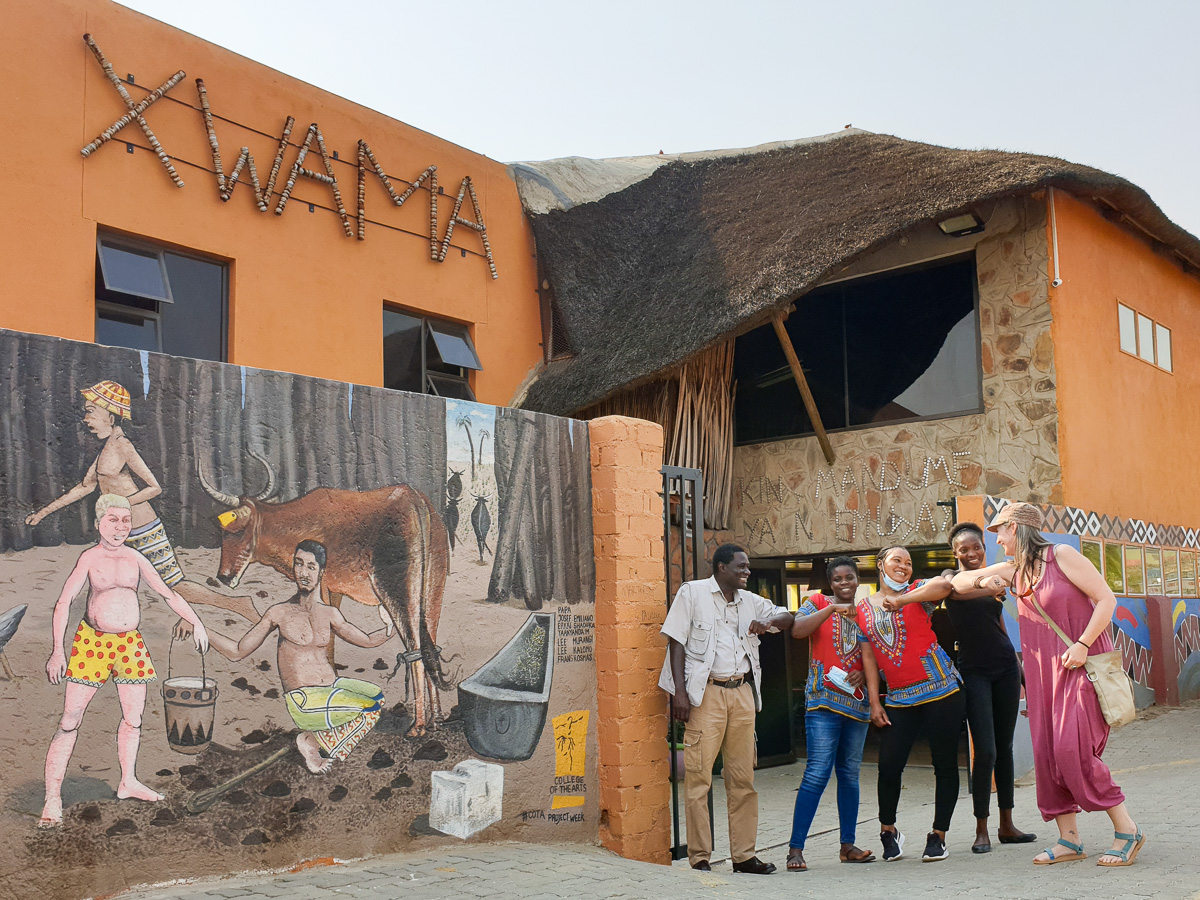 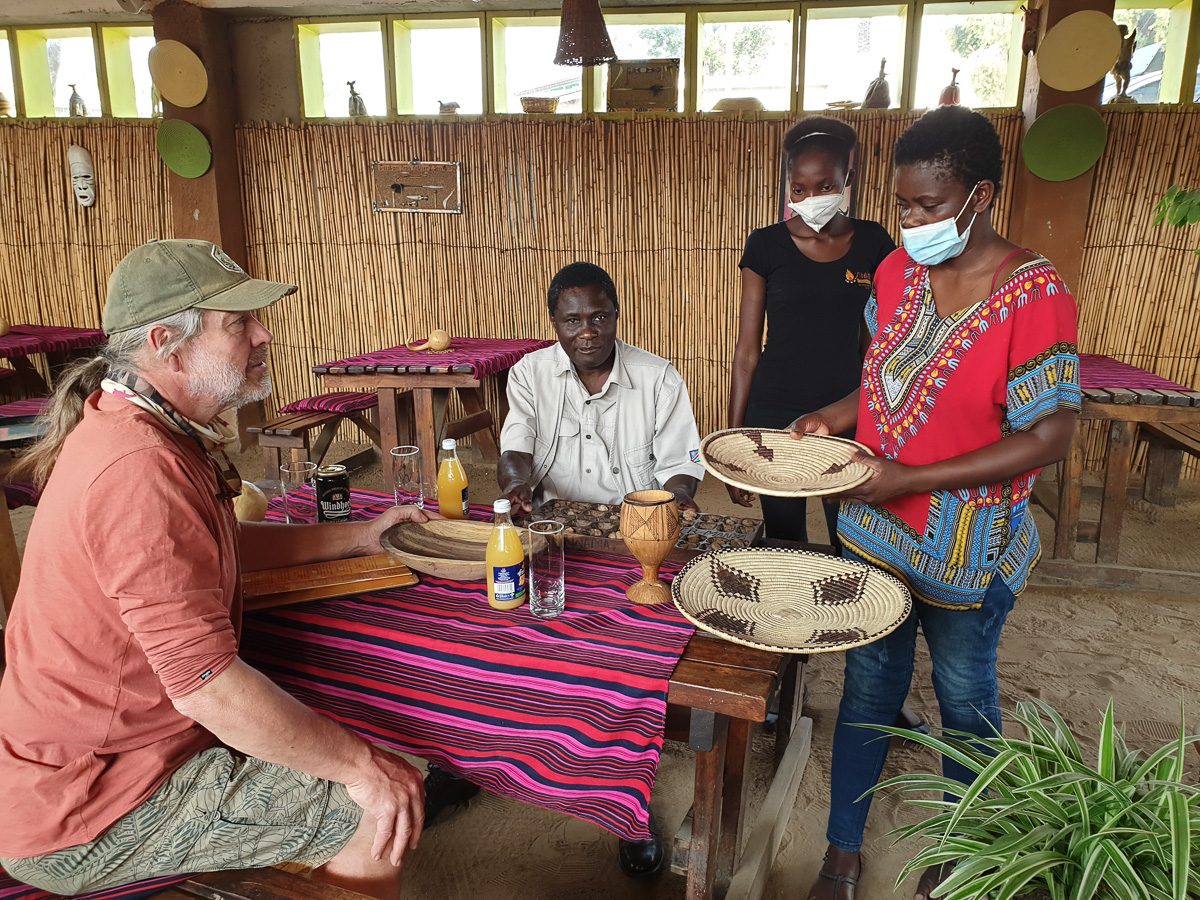 This community market, affectionately known as Single Quarter's Kapana Meat Market.  At this juncture, our social interaction is displayed at its best.  From diverse cultural backgrounds, you are offered a different perspective with respect to our fast-food culture.  This market is an incorporation of everything including light social gathering venues.  Before Covid-19 pandemic and its protocols overshadowing everything, the market was very famous for all people across all walks of life.  Regardless of their tribal background, political affiliation or social status, all Namibians rubbed shoulders from political elites to celebrities to ordinary men on the street.  It also offers general grocery stands selling African traditional food ingredients such as dried spinach, mopane worms, fresh vegetables, and a large variety of dried beans.  Definitely an experience not to be missed! 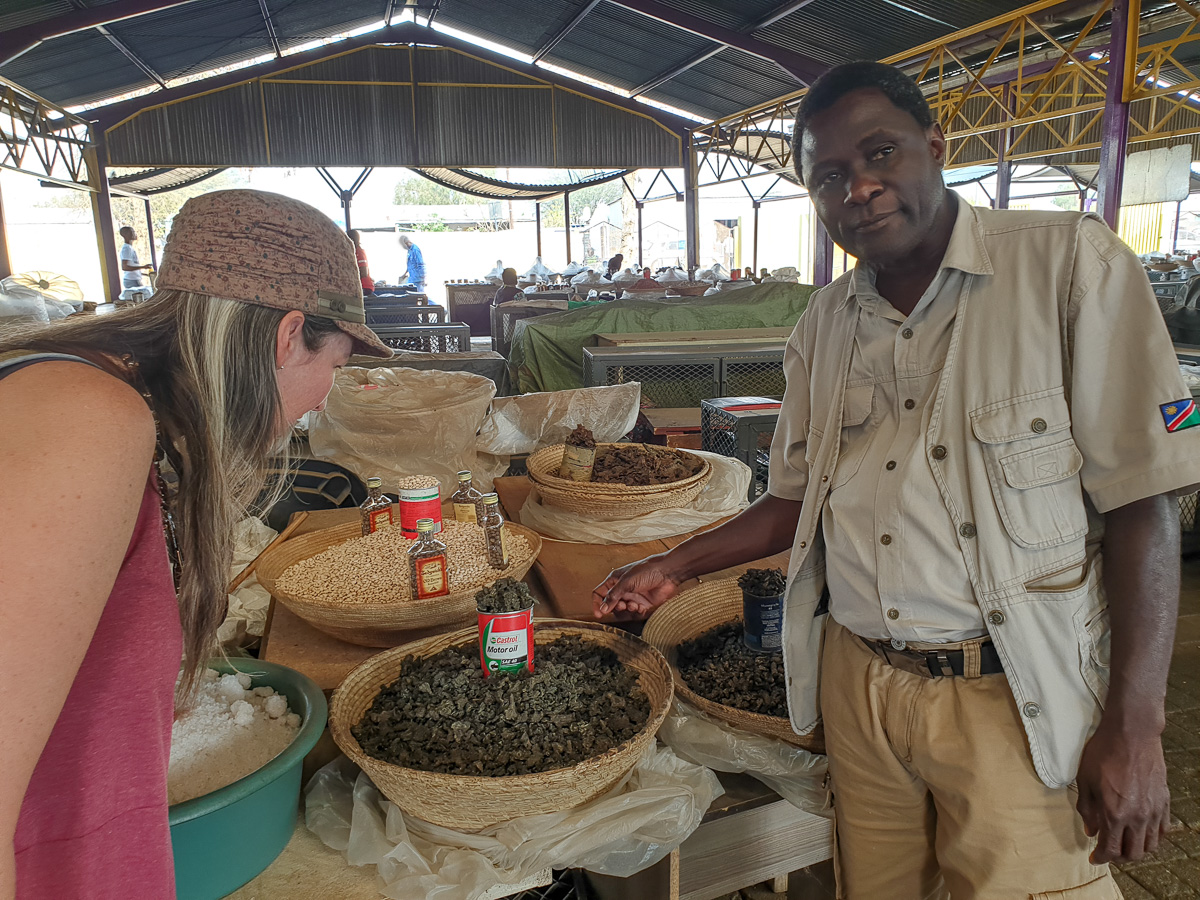 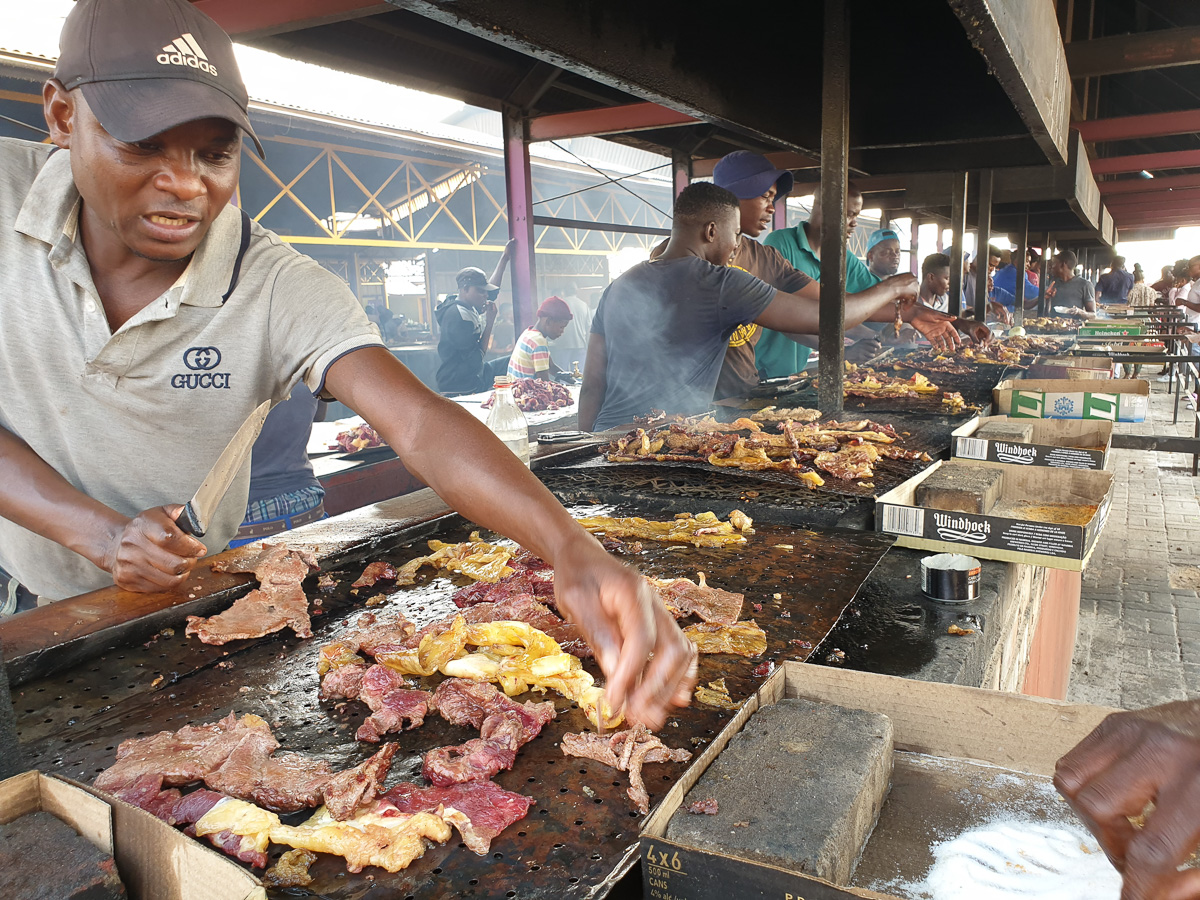 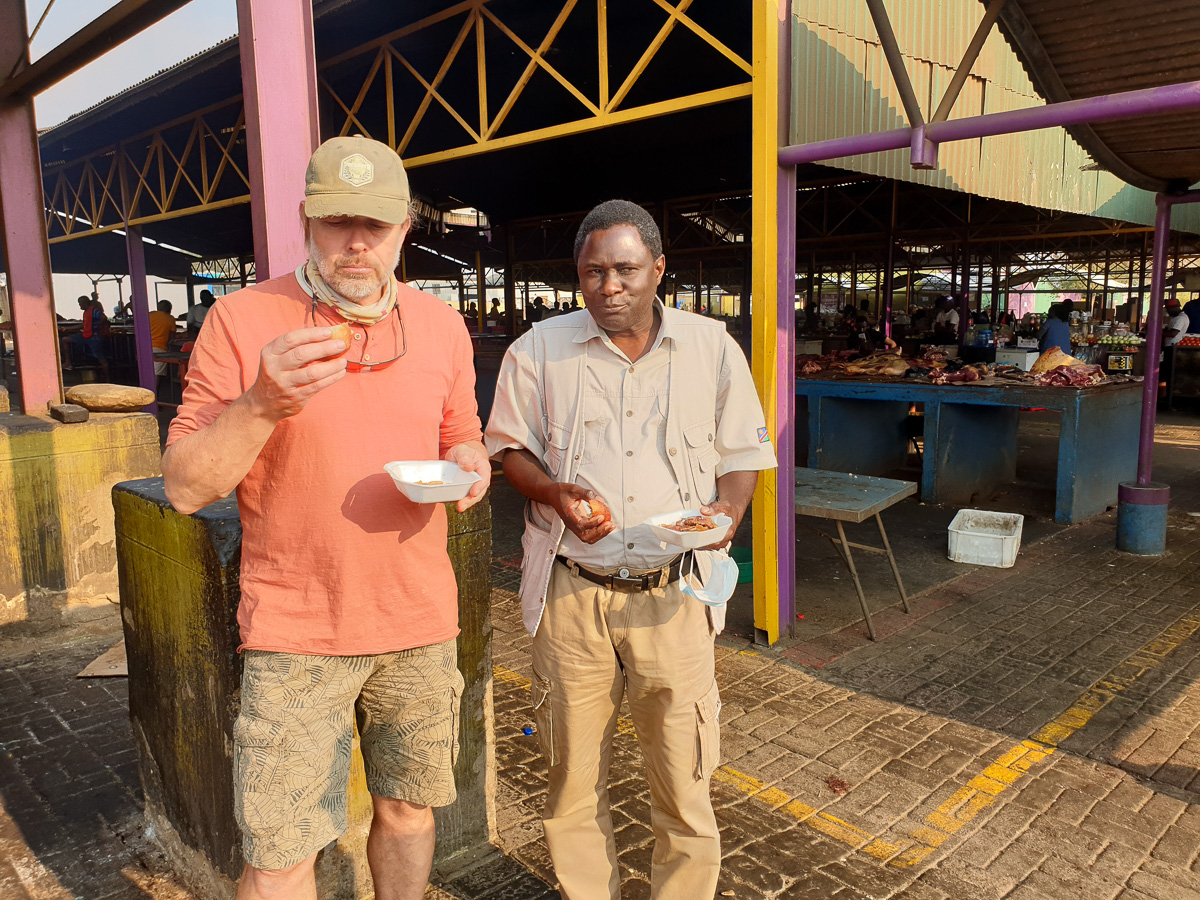